I look at this picture below now and if I’m honest it grosses me out. It’s not a good looking face by any means but it is one that taught me so much. One that taught me about inner beauty and allowing that to shine through, rather than relying on an aesthetically pleasing face.

The photo below was taken on 4th August 2006 and you might think it is the right side in the photo that is the distorted one but actually it is the left-side. The side that was paralysed and would not move. I couldn’t drink, I couldn’t blink and I certainly couldn’t smile. 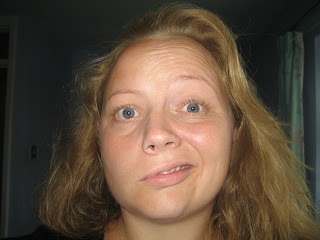 The one below was taken a couple of months later on 14 October 2006 and you can see the droop had gone and the corner of my mouth could raise a little but there was still a long way to go and a lot of physical and emotional healing yet to happen. 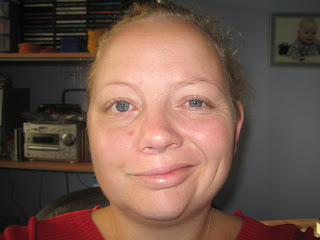 The onset of Bells Palsy was all very strange. For about a week before the paralysis occurred I had a number of odd feelings and ailments that there appeared to be no connection between. I had started to wonder if I was turning into a hypochondriac and as such had not mentioned any of the symptoms to anyone. I didn’t even realise anything different had happened until I came down for breakfast one morning whilst staying at my parents and my Mum said there was a problem and to look in the mirror. Only then was I aware that something was wrong.
It was definitely my faith that allowed me to stay calm and to wake my husband and ask for a lift to the emergency doctors, where they suspected a stroke and sent me straight off to A&E but luckily it just turned out to be Bells Palsy, a virus that strikes the facial nerves and paralyses one side of the face. Most people that are affected with it find it totally clears within a few days or a week, its only a few of us who are particularly unlucky and  find it takes months for it to rectify and that actually we are left with the residual issues forever. Here I am nearly ten years later and I still have a wonky smile, I can’t blow you a kiss and one eye waters when I eat but in honesty I’ve learnt to mask it and most people do not notice nowadays, it is only when I try to blow up a balloon or blow bubbles that it becomes obvious.

That first weekend with Bells Palsy was a really powerful time and I attended a wonderful service at a church near my parents, receiving prayer from the ministry team there and words from the Lord. I shed my first tears since it had happened and was even more upset to see I could only cry out of my left eye.

After a week or so nothing had changed, no improvements to my face at all and I admit I felt sad.I discovered that the severity of the palsy (or paralysis) depends on the damage to the 7th cranial nerve. The more severe, the longer the recovery period. By this point I was in agony, here is part of my diary entry for Wednesday 5 August 2006 (Day 13) –

“The pain is getting worse, I never expected this. For me I thought paralysis would be just that but no, my face on the poorly side feels like it has been beaten black and blue, just to touch it hurts.”

The doctor diagnosed me with facial neuralgia and gave me some drugs to take for it, these knock me out and stop me driving but the carbamazepine along with co-codamol and nurofen seem to do the trick and the pain starts to subside. In the end I am off work for about six weeks with the facial pain, along with the tired and scratchy eye that still hurts. I think one of the worst things was not being able to eat or drink properly; I could only use half my mouth so everything would spill and I had to use a straw to drink very small amounts. After about six weeks I went back to work as I could blink again and then finally after about four months the visual differences became less noticeable and my face did seem to be making some recovery from the physio I was having.

As I mentioned earlier it is now nearly ten years since I first had Bells Palsy and if I get too tried, ill or stressed my face starts to droop a little and you can see it more, so it is a reminder to look after myself. It took me a good couple of years to come to terms with the emotional loss of my smile and that was a hard process but it has been a joy over the years to realise how God has healed and restored my inner smile. I remember crying abundantly one night at church when I felt sure God had given me back my smile.

Do you know why I believe this happened to me? Because I was not listening to God and His will for me. I had made myself so busy and so stressed with tons of things. I needed a wake up call, one strong enough that it would get me to re-assess my life and give up some of the tasks and start to be a better wife, mother, employee, friend, daughter etc etc

It worked! I stood down from most of my roles, I took some steps in faith by applying for jobs I believed God wanted me to go for and by November 2006 I was pregnant with my wonderful twinnies. What a blessing they were. We had been trying to get pregnant since 2004 and nothing but then when I least expected it I feel I was rewarded for my faith in the Lord. I knew that all would be OK and I knew that losing my smile was not the most important thing in the world.

I’ve even got past the stage of looking at photos and hating my asymmetrical smile and you know what this imperfect face is slowly teaching me? Humility! I am very aware that I can be flawed with pride at times. In the past my sense of self-importance has been out of control but nowadays I am pleased to say that I can recognise this character defect and do work to help keep it in check!

A chance encounter with a viral illness changed my life and shaped my character and helped to make me the imperfect Christian I am today. It feels unbelievable to say it but I am glad it happened or I may never have grown in the way I have.

You must have been terrified that it was a stroke. I can start to imagine that a condition like this would make you rethink a lot of things as our faces are such an important part of our makeup.

It was amazing just how calm I was Erica, very hard to describe, I just had this sense it would all be OK.

I have never heard of Bells Palsy an it must have been so scary for you when it was first diagnosed. I am glad it made you stop and re-evaluate your life which resulted in the arrival of your beautiful twins. I am not sure I would have your faith though

It is amazing how things come together and it all works out fine Kara. Mich x

I’ve never heard of this before so thank you for writing about it, especially your story and how it changed you life x

I’m surprised how many people have not heard of it before. Since I did I have found quite a few other sufferers. Mich x

Michelle, I have never heard of Bells’ Palsy before reading your story, so sorry you had to go through this experience. xx

It all worked out for good in the end, just not so nice when I was right in the middle of it. Thanks Oana. Mich x

What a shock for you when it happened, and thank goodness that it wasn’t a stroke. I didn’t know about Bells Palsy – thank you for sharing your experiences.

Yes indeed, thank goodness it was not a stroke. That would have been properly scary. Mich x

What an inspiring story, it must have been very scary and it sounds painful too. Glad that your faith gave you strength and comfort.x

Thankfully enough time has no passed that I can’t really remember the pain too much but I know from looking back at an old diary it was agony then. I’m just glad it helped me make some positive changes in my life.

This is so moving Michelle. Thanks for sharing. And I think you have a lovely smile. I’ve never noticed xx

I am glad it is not too noticable anymore but it was so good for helping me to realise that the way we look is not everything. Thanks Jo x

This site uses Akismet to reduce spam. Learn how your comment data is processed.